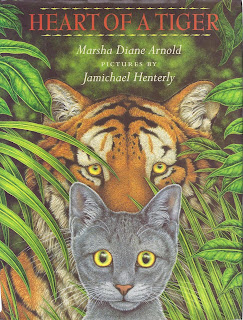 In India, a house cat named Visvasi Naukar -Faithful Servant, has a litter of four kittens. They live on a plantation surrounded by the forest and are referred to by their birth order. However, that will soon change. Tradition dictates that a year after birth a special Naming Day Celebration is to be held in which the animals are permitted to choose their own names. There is only one restriction placed on the name selection: the animals of the forest must agree that the name chosen is “fair and honest.”   With the Naming Day Celebration only one week away, Numbers One, Two and Three discuss among themselves the names that they desire:  Mighty Hunter, Calico Colors and Adventurer, respectively. These names accurately reflect their personalities or appearance. 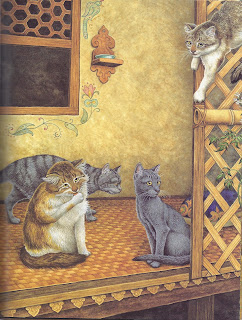 Number Four is the runt of the litter and he is afraid that due to his size he will be saddled for life with a name like Smallest of All; the thought is unbearable.  Unbeknownst to his siblings, day after day Four has been observing Magnificent One, Wondrous Beast, Beautiful Bengal,  that lives in the forest. Despite his size and despite being a house cat, Four feels that he too should have an impressive tiger name like Golden Splendor or Silent Walker. Four has wanted to follow the tiger and learn to be like him and thereby rightfully chose a tiger’s name on Naming Day, but he has been too timid. With Naming Day only one week away, Four realizes that it is now or never. He plunges into the forest in search of Beautiful Bengal.

As he tracks the tiger, other animals in the forest inquire as to Four’s presence. When Four reveals his aspirations, some animals ridicule him; he, however, is undeterred. He even secretly continues to follow, despite the tiger himself scoffing at him and sternly commanding him to return to his mother. 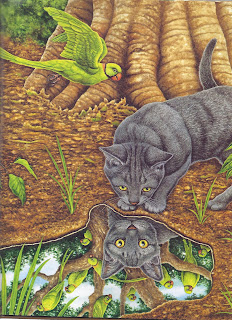 As the week elapses, Number Four is weary; his fur is matted; his paws hurt; he is hungry, yet he perseveres. He has gained much knowledge including “how to live wisely and strong on his own.” 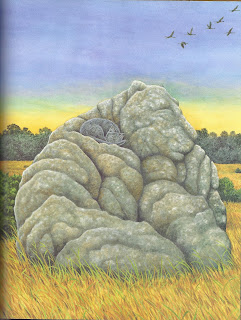 One day, Four averts a tragedy. Through being silent and observant, he sees that Beautiful Bengal is in danger.  Still small, but increasingly clever and brave, Four is able to save his life. The tiger is grateful, but he then bluntly utters what is obvious, but nevertheless, Four needs to hear: while Four wants an impressive tiger’s name, Four will never be a tiger.  Beautiful Bengal softens his statement when he concludes with words of inspiration, “But inside, Little Four, you have a heart that will grow in wisdom and power as you grow.” 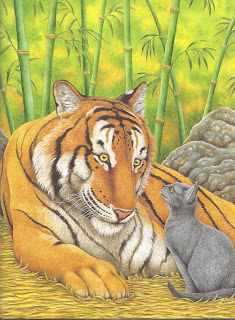 Naming Day arrives, and with all the animals of the forest in attendance including  Beautiful Bengal, Visvasi Naukar introduces her kittens by their chosen names, “Bahadur Shikari -Mighty Hunter; Rang Birange Kapare -Calico Colors; Sailani – Adventurer.” 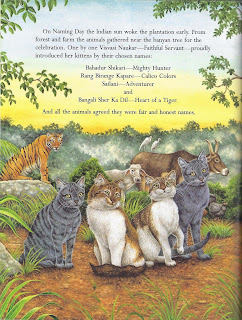 Lastly she introduces Number 4, “Bangali Sher Ka Dil – Heart of a Tiger. And all the animals agreed they were fair and honest names.” 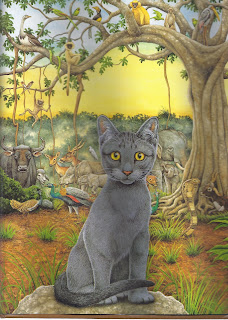 Heart of a Tiger has such an empowering message of personal vision and perseverance.  It is one that I want my children to carry with them throughout their lives.  Dream lofty dreams for your life. Have the courage to act on those dreams. Persevere in your pursuit of those dreams despite the ridicule and skepticism you will experience at times.  While  a picture book, Heart of a Tiger would also make a great gift for an adult because we are never too old to be reminded of this message.

The kids enjoy Heart of a Tiger so much that they have named our recently adopted kitten  Bangali Sher Ka Dil, “Bangali” for short. Beautiful writing. Beautiful illustrations. Beautiful message.
Posted by Donna at 3:41 AM

Donna
I'm a wife and a mom.We have two sons and a daughter, aged 6, 4 and 3. I have a passion for kids’ books.Well, technically I crossed the line from passion to obsession after purchasing 400 kids' books and from obsession, it was only a hop,skip, jump and purchase of 150 more books to crazy obsession. I decided that before I went from crazy obsession to a candidate for A&E's Hoarders, I should probably find a way to rechannel my desire for personally acquiring excellent books into recommending that others do so. My blog will feature books from our collection with 3 recommendations a week. Our little ones love books as much as I do. I'm so grateful to the extraordinarily talented authors and illustrators out there for giving my husband and me a lifetime worth of memories of being snuggled up with our kids reading, laughing and enjoying excellent books. I am confident that our children will look back on this daily ritual as the fondest of their childhood memories. Unless indicated, all the books I recommend are still in print and are available to be purchased online AND/OR are available at the wonderfully extensive Chicago Public Library. www.chipublib.org